The North York Moors offer plenty of walking opportunities, including the scenic Hole of Horcum.  This is a huge natural amphitheatre 400 feet deep and more than half a mile across.  Local legend says that it was formed when Wade the Giant scooped up a handful of earth to throw at his wife during an argument!!

The Hole of Horcum is particularly spectacular in late August and September when the heather is out.

On a weekday in August we parked our car at Saltergate car park on the A169 just north of Pickering.

There were surprisingly few people around as we walked along the mainly flat rim of the Hole of Horcum across Levisham Moor. We took a short detour to the remains of Skelton Tower.  From Skelton Tower there are lovely views across the valley and the North York Moors Railway line.  It would be a great place for a picnic lunch.

From Skelton Tower we made our way to the pretty village of Levisham where we stopped for an excellent lunch at the Horseshoe Inn.  To complete the circular walk, we walked down into the Hole of Horcum. We were surprised to meet two young highland heifers standing by one sign post. I wish I had had my camera handy. The hardest part of the walk was last – the climb up out of the Hole of Horcum. Luckily there was an ice cream van in the car park.

More details of the walk (without the detour to the Horseshoe Inn) can be found on the North York Moors website. 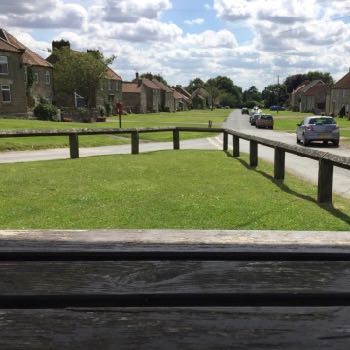 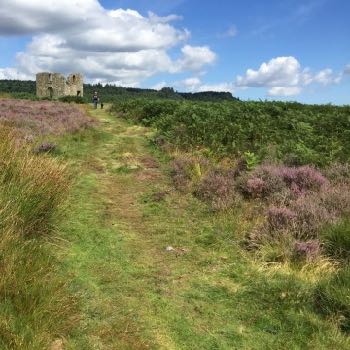